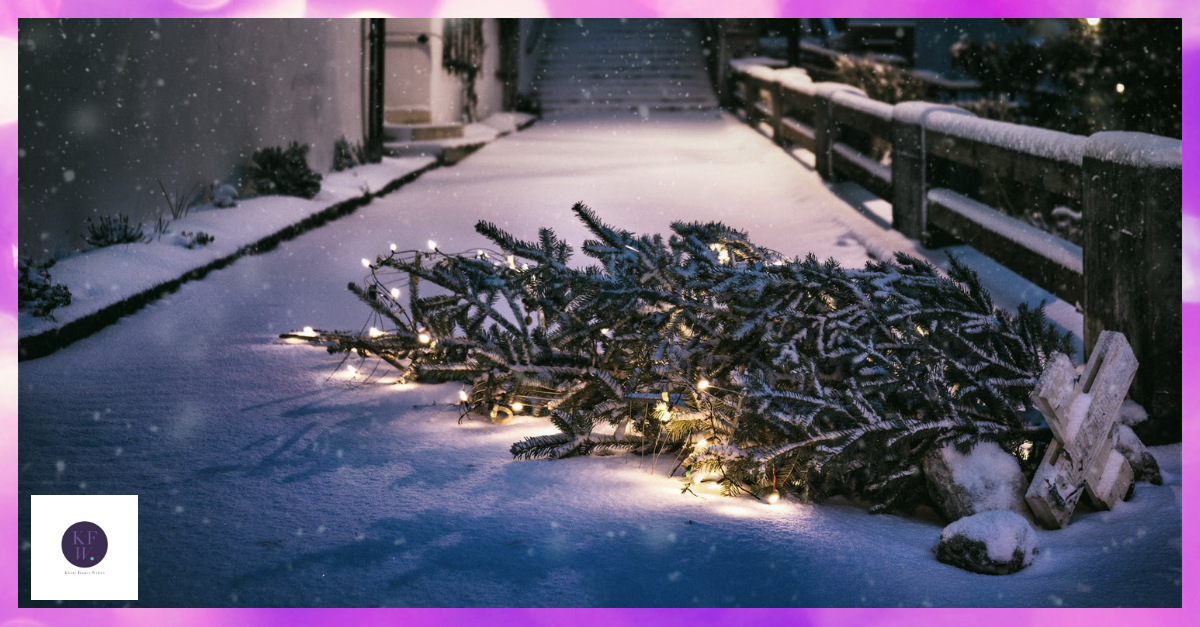 Tom watched Laura as she paced back and forth across the kitchen.  She was still clutching the cloth in one hand and nervously nibbling the fingernails on the other.

She stopped and looked up at him. There were tension lines between her blue eyes.  “You don’t know her like I do,” she replied, “she’ll find something.”  She glanced towards the living room and he could tell she was thinking about the Christmas tree.  “Is the tree too gaudy?  She hates gaudy.”  He stood up from the sofa that fitted perfectly into the bay at the end of their open plan kitchen and walked towards her.  “Oh God, the sofa!  She won’t like that.  And having Christmas dinner in here; what was I thinking?”

Tom took her hands and looked down into her eyes.  “It’ll be fine.  She’s your grandmother, not the devil incarnate.” He ignored Laura’s snort of derision. “Besides, your mum and dad will be here.  Feed her a few glasses of sherry and find her a comfortable spot on the sofa and it’ll all be OK.”  He watched as her face relaxed and the lines disappeared from her brow.

“Do you really think so?”

“I do.  She’s just coming to see our new home.  And,” he continued as a cheeky smile spread across his face, “if she really hates it we have the perfect excuse never to invite her again!”

Laura burst out laughing and hit him with her j-cloth.  “You’re despicable!”

She grinned and pushed up onto her toes to give him a kiss. “Absolutely.  You’re right. It’s only two days, what’s the worst that could happen?”

The doorbell rang as Tom was stirring the mulled wine.  He heard Laura open the door and greet her Dad cheerfully.  By the time Tom had reached the hall Richard had taken his coat off and hung it on one of the hooks by the door. A small suitcase sat by his feet.

“How was your journey?” Tom asked.

Richard grimaced. “Too long.”  He turned to look out of the front door and saw Laura’s mum, Catherine, trying to simultaneously carry a large bag and close the car door, whilst also attempting to keep a small woman, who closely resembled a goblin, upright.  Tom bounded towards the front door.

“Hello!  Catherine, can I help? I’ll take that bag in for you if you like.”

The goblin spoke. “No you won’t! I know what you youngsters are like, throwing things about.  Catherine, you’ll take it upstairs for me.” Catherine’s eyes darted from Laura to Tom, eyebrows raised.  “Let’s get you into a comfortable seat, shall we mum?”  She looked towards Laura.  “Kitchen?”

An hour later they’d polished off plates of roast gammon and jacket potatoes and listened to Deirdre’s incessant commentary about the ridiculous fashion for open plan dining, questions about what sort of people thought it was appropriate to have a sofa in the kitchen and why was Laura wasting time making a roast dinner on Christmas Eve.  Tom was about to tell her that he’d made the dinner but feared that would provoke another onslaught.  Laura appeared to have read his mind as she shook her head, almost imperceptibly.  Oh dear, he thought.  All this and she hasn’t even seen the tree yet.  “I suppose we’re having Christmas dinner in here too.”

“Er, it’s a cat.” Laura answered.  Her tone suggested that she thought it might be a trick question.

“We’re just looking after him for a friend, she’s away for Christmas.”

Eyebrows raised around the table as she launched into a stinging critique of people who thought it was perfectly acceptable to swan off for Christmas.  What did her family think, that’s what she’d like to know?  When she finally paused for breath, Laura commented that they must remember to close the bedroom door as Jasper had been sleeping in there and she was sure her grandmother didn’t want to share.

“Well I hope you changed the bedding.  Heaven knows what that thing could have left behind!”

Mercifully, the evening got better, mainly because Deirdre had fallen asleep in her chair.  The effect on Catherine was immediate and profound.  Tom didn’t think he’d ever seen every muscle in a person’s body let go of tension all at the same time.  Laura smiled, picking up the sherry bottle to pour her mum another glass.  They chatted peaceably, talking about their plans for the house and discussing their honeymoon options. Tom wondered how someone as harshly critical as Deirdre could have produced a daughter like Catherine.  Perhaps she had deliberately gone the other way.

Eventually, Richard stood up and announced he was falling asleep. “I think it’s time I was in bed.”

Catherine laughed. “You’re probably right.” She looked at Laura. “Of course, we’ll be back down in half an hour when he’s wide awake again.”

Laura smiled at her mum. “I’ll leave the sherry out then.”

As she spoke, Catherine approached Deirdre’s chair and reached out to stroke her face gently.  “Mum? We’re going to bed.”

Deirdre snorted and gradually opened her eyes. “What?”

“We’re going to bed Mum, shall I help you up to your room?”

Deidre was clearly still half asleep.  She grunted her assent and reached out for Catherine’s arm to pull herself up.  Her glare of disapproval took in the room but she said goodnight as she went.

“Dear God, what is that noise?” Half an hour later they were all back downstairs as the sound of a jet engine issued forth in the house.

“It’s Mum. Sorry Tom, I forgot you’ve never spent a night under the same roof before.  I’ve never known it to be this bad.”

“Isn’t there anything we can do?” Tom asked.

Catherine shook her head. “I’ve been in to try and turn her onto her side, but she’s wrapped herself up in the duvet, I can’t move her.”

Laura suggested that they have another drink and turned on the TV.  There must be an undemanding Christmas film on somewhere that would help them to block out the noise.  A speedy flick through the channels later they’d found ‘Die Hard’. This allowed Tom and Laura some good natured banter about whether it was really a Christmas film, which improved everyone’s spirits. Tom opened the brandy and a fresh bottle of sherry and they all settled down to watch.

When the final credits rolled, Laura muted the volume on the TV cautiously.  They all breathed a sigh of relief when they realised that the snoring had stopped.

“Thank goodness for that,” Catherine said.  “She must have rolled over on her own.”

Laura gave her parents a hug and said goodnight.  “Sleep well everyone.”

Tom woke up slowly on Christmas morning.  The room was still dark and he stretched himself out under the covers, wondering whether he needed to get up and start work on Christmas dinner.  He decided that a few more minutes couldn’t hurt.  Laura appeared carrying a cup of tea.

He furrowed his brow and turned over to look at the bedside clock. “Didn’t your gran say she was always up at half past six? Is your mum up with her?”

Laura shook her head.  “It would appear that she’s still asleep.”

Just then, there was a tap on their door.  They both said hello and heard Richard’s voice asking if they were both decent.  When they laughed and said yes, his face appeared in the gap as the door opened.

His expression was serious. “You need to come.  It’s your gran.”

She had stopped breathing sometime in the night.  Laura, Tom, Richard and Catherine stood around the bed looking down at her body.  Tom tried to think of something to say, but couldn’t.  The silence around the bed felt oppressive, but he couldn’t bear to look up and make eye contact with anyone.  He screwed up his courage and looked towards Richard, the only other person in the room who wasn’t a blood relation.  He seemed lost for words as well.  Finally, Catherine spoke.

“We were watching ‘Die Hard’ and she died.”

Tom felt a sudden urge to laugh but managed to stifle it.

“I can’t believe we were just relieved that she’d stopped snoring.” Laura sounded as if she was about to laugh, but it caught in her throat and she began to cry.  Tom wrapped his arms around her, relieved for something to do.

“We should call someone.” He thought for a moment, wondering who would be answering the phone on Christmas Day.  “There’s an out of hours number for the GP, we could make a start with that.”

Several phone calls later, they were all on their seventh cup of tea, waiting for the cavalry.  Tom had remembered the day his own grandmother had died, years before.  There had been long periods of sitting punctuated by people putting the kettle on.  No-one seemed to know what else to do.  He’d decided to put the turkey in the oven. It was Christmas Day, after all. It might be an utterly pointless exercise, but at least if it was cooked they could eat it cold.

Jasper sniffed around, investigating each hand in turn to see if there was anything to eat.  Laura had poured some cat biscuits into his bowl and he ate noisily.  At least someone in the house was unaffected by all this, Tom thought.

The doctor arrived, examined Deirdre and gave his view that she had died of a heart attack.  The undertakers had arrived shortly after his departure and had been mercifully swift.  They all watched as they carried the black bag down the stairs and onto a gurney.  She had been small in life but she was tiny in death.  They had manoeuvred the bag with ease and before Tom knew it the gurney was outside, ready for transport.

“I want to change the bed.” They all turned to look at Laura, who had been silent for a long time. “I just want something practical to do.”

Tom had volunteered to help and they went upstairs together.  Laura moved mechanically, stripping the bedclothes while Tom found fresh ones.  He couldn’t remember a time that they had changed a bed together, but their movements flowed together and the job was soon finished.

Laura stared at the bed.  “It’s as if she was never there.”

Tom moved around the bed to stand next to her and took her hand.  As he did, they heard a noise from behind them.  The door had been ajar but it creaked as Jasper entered the room.  Looking up at them, he jumped onto the bed.  He circled for a few seconds, patting the new covers and circling some more.  Then he settled himself in the centre of the pillow.

“Her face would have been?” Laura finished Tom’s sentence.

The door had been shut, hadn’t it? “She would have woken up and shooed him away, surely?” Tom asked.

“Of course she would.” Laura replied. “As long as she could get her arms out from underneath the duvet.”

The both stared at Jasper, licking his paws as he spread out on the pillow.

“She did say cats were evil.”