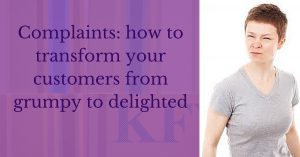 When I was a solicitor, I’d often be called upon to speak before a judge.  Sometimes it would be a pleasant chat where everything was agreed.  It could also be a battle of wills where I’d try to persuade them to give me what I wanted whilst remaining civil to my opponent.  That could be a challenge if my opponent was being an obnoxious swine.

Sometimes you knew what to expect.  We used to have a list of other solicitors who made a habit of being unnecessarily difficult pinned up in the office.  Occasionally both sides would be in complete agreement and we’d be derailed by an irate judge demanding to know why we’d come up with something so stupid.

Dealing with customer complaints can be similarly challenging.

Whatever the issue, when conflict arises what went before is as important as the complaint itself.  Getting to know your customer and what’s important to them can make all the difference.  If you take the time to listen and advise them according to their needs instead of what you want to sell them you’ll get on a lot better in the long run.

There is an overwhelming amount of advice available telling you how to sound interested in what someone else is saying.  It’s all rubbish.  If you’re dealing with a complaint that could affect your business you need to be interested.  That means actually listening and responding to what you hear.

That said, some golden rules still apply.  If someone is shouting at you it’s very easy to shout back.  Don’t.  It makes you look unprofessional and it won’t get you anywhere.  If your blood is rising take a deep breath and make a conscious effort to speak quietly.  The contrast alone can make an angry person realise that they’re shouting and calm down.

Don’t interrupt.  Some people just need to rant and when they’ve finished they’ll be much more likely to listen to you.

When you respond, summarise what they’ve just told you.  If you need to apologise, get it over with.  If the customer has made a mistake, tell them, but still apologise for the misunderstanding.

The most important thing to remember is to ask them what they’d like you to do to solve the problem.   Don’t make things up or make excuses.  I once dealt with an interim hearing for a colleague who was on holiday and kept referring to it not being my file until the judge, firmly but quietly, said “it’s your file today.”  Passing the buck, whether it’s to a colleague or a supplier, only annoys people so only do it if you genuinely can’t agree what they’re asking for.

If you get a written complaint I’d always advise responding in person or over the phone if you can, simply because it enables you to make sure you’re clear on what the issue is and you can monitor how your response is being received.

Getting some notes down detailing the issue and your response means you can cover everything and also simplify the information where necessary.

How do you deal with complaints? If you have your own golden rules, let me know!

If you want to try a new approach to your content marketing, Get in touch or register here to receive regular updates, special offers and a free copy of my guide, ’10 Tips to create copy that converts’.