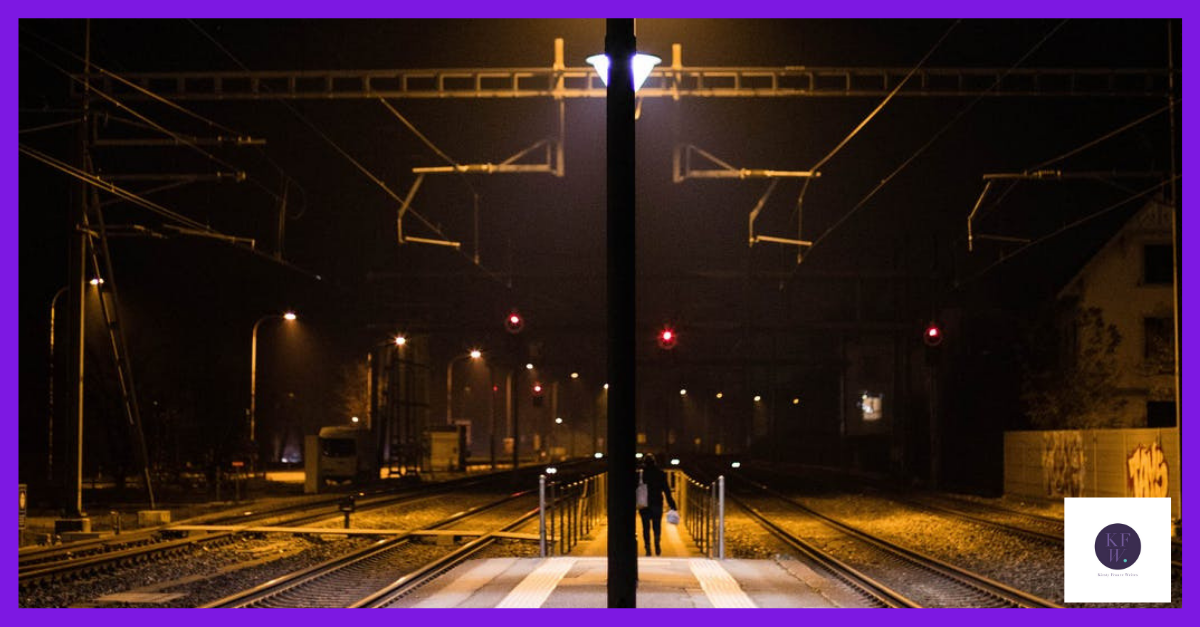 Craig shivered as he stepped down onto the platform at Leicester.  The little train might only have had two carriages but at least they were both heated.  He silently cursed himself for developing the habit of standing outside on the platform at the end of the line.  It really wasn’t necessary but he’d been doing it for so long he couldn’t stop.  The only time you actually needed to stand outside was at the intervening stations, where people didn’t always shut the door properly behind them and sometimes fell off the train trying to dismount.

There were only a handful of people waiting on the platform for the 2128, the last train of the evening on this route.  Another hour to the end of the line then he could head home.  He pondered whether to stop in at the pub on the walk back.  Perhaps not.  The temperature was dropping and if he ventured into a nice warm bar he might never want to leave. The landlord was bound to turf him out at some point and by then it would probably be even colder. He consoled himself with the thought of a hot shower and a warm bed at home.  It would have been even better if there’d been someone in it waiting for him.

He’d counted four people onto the train.  2125. Nearly time to go.  One more minute and this train’s existence would vanish from the bulletin board upstairs.  It had been designed to stop people from hurting themselves running down the stairs.  Craig wondered if it worked.  He’d never seen anyone fall but people still ran.  They saw that the board didn’t have their train on it but that the digital clock gave a couple of minutes before the train was due to depart.  Of course, people like him didn’t get to see the statistics.  He began to pace up and down the platform, stamping his feet to keep warm.  He’d reached the middle of the two carriages when a noise behind him made him turn.  She’d clearly hurried down the steps thinking she was going to miss the train.

She slowed as he turned to look at her.  “It wasn’t on the board,” she gasped, catching her breath.  “I thought I was going to miss it.”

“You’re alright for a minute or two,” he replied. “Get yourself settled in, it’s nice and warm in there.” He nodded towards the can of Diet Coke in her hand. “I daresay you’ve given that a bit of a shake.”  She smiled, her eyes betraying extreme weariness as she stepped up onto the train.

He looked up at the clock as the seconds passed.  One minute to departure and there was no sign of any new passengers.  He glanced down the train to make sure that the other three doors were closed before stepping up and shutting the final door behind him.  Then there was the familiar clunk as the driver activated the automatic locks. A few seconds later the engine sound increased and they pulled out of the station.  As they moved slowly north, he leaned back against the wall and yawned.  It had been a long day after a sleepless night, but at least he had the weekend ahead of him.  Some of his colleagues tried to avoid this line at all costs.  It was too slow and boring for them, but he liked it.  A Friday night shift on the main line could find you dealing with fights and vomit on the 2330 service.  This one was always quiet because it left too early for people who were having a proper night out.  At least if he wanted a pint on the way home he could have one.  God, he needed sleep.  His Granny had taken one look at him that morning and tried to press a packet of sleeping pills into his hand as he laughed and told her drugs weren’t the answer.   The news about Harry had just been a shock, he’d get over it.  He was about to lean back again and close his eyes for a minute when he heard the singing.  So much for a peaceful journey home, he sighed.

The minute he walked into the carriage he could see the source of the noise.  The song that emerged from the man with the can of Stella was so tuneless it was impossible to tell what it was meant to be.  Perhaps he’d composed it himself.  The woman was walking down the aisle and passed into the other carriage as he approached.  The two remaining passengers sat opposite each other at a table and he made eye contact as he passed, giving them a reassuring nod.

“Excuse me sir.”  The man looked up at him, struggling to focus. “Are you OK?”  The reply came in the form of a drunken smile and a sentence that might have been ‘I’m all right.’  It was very hard to tell.  “Where are you headed?”  It was no good, his speech was completely unintelligible.  “Can I see your ticket?”

The man nodded slowly and pulled a series of bits of paper out of his pockets, along with a couple of grubby looking tissues.  He spread them out on the table in front of him.  Craig didn’t want to touch anything if he could help it. Thankfully he was able to identify the ticket among the debris.  It was crumpled but he could make out today’s date and the destination.  The next stop.  What a relief.  The man was still moving the debris around.

“That’s OK.  Your stop’s next, I’ll come and make sure you get off OK.  Just one more thing;” the man looked up expectantly.  “The singing.  It’s a bit – loud, could you give it a rest until you’re off the train?”  He braced himself.  The man seemed perfectly peaceable but singing-based criticisms didn’t always go down well.  Craig breathed a sigh of relief as he nodded and closed his eyes, his head lolling back against the seat.  He decided he might as well check on the other passengers whilst he was here.  The checks were made almost in silence, as he mouthed ‘OK?’ to the other two people in the carriage and they nodded and smiled in response.  The woman with the can of Diet Coke appeared to be asleep.  The can was on the table in front of her along with her ticket.  Last stop but one.  Only five minutes from him.  He saw her open her eyes and startle slightly as she saw him standing over her.

“Sorry, didn’t mean to scare you.  I was just checking where you’re headed in case I needed to wake you up.  The singing’s stopped.”  He nodded back towards the other carriage.

She smiled. “That’s a relief.  I was a bit reluctant to walk past him, you never know how people are going to react when they’ve had a drink.  I only moved because, well – let’s just say I have some bad memories.”

He nodded as if he understood. “He seems fairly calm now.  I’ll leave you in peace.”  Her eyes were already closed as he moved on.  He spoke briefly to the other passenger. Her face was familiar but this wasn’t her usual train and he commented on it as the train came to a halt.

“Leaving drinks after work.  This train is a great excuse for going home early when you won’t miss the person you’re saying goodbye to.”

He moved on towards the driver’s cab and considered how neatly the carriages had segregated themselves.  Three men in one, two women in the other.  He wondered what it was like for a woman to travel alone.  Of course, he’d had the training.  The company was very hot on keeping passengers safe, particularly women.  Could he seem intimidating? He tried to be a calming presence.  Her startled face popped into his head. As he stood in the alcove at the end of the train he looked at his reflection in the window.  He didn’t think he looked intimidating.  Short hair but not short enough to suggest neo-Nazi.  Chubby cheeks and a podgy middle.  Nothing to write home about.  No wonder Harry left him.  He fell into a reverie and gradually realised that the train hadn’t moved.  There was always a red signal before the first stop to allow the express train to go through first.  He hadn’t heard the fast train go through and when he looked at his watch their arrival time at the first stop had already passed.  He stuck his head out of the window.  The signal ahead of them was red.  He picked up the phone and signalled to the driver.

“We’re being held here.  Apparently some silly bugger decided to go for a walk on the track. BTP are trying to find him.  We might be at half speed even when we do get moving.” He laughed as Craig groaned.

“What’s he trying to do, kill himself? There was I feeling smug because I’m not on the Friday night vomit train. Jinxed myself again.”

He signed off and walked through the train to talk to the passengers.  It seemed pointless using the PA for five people.  The first woman groaned.

As he walked towards Diet Coke woman he thought he could hear snoring.  He touched her briefly on the arm but her eyes didn’t open.  Never mind, he thought.  He thought she was probably better off asleep – at least the she wouldn’t know she was stuck.  In the next carriage only two out of the three men were conscious.  Singing man was definitely snoring.  The other two rolled their eyes then returned to the crossword.  Craig had planned to carry on to the other end of the train, but something stopped him.  Had she really been asleep? He thought that perhaps he’d convinced himself that he heard snoring.  That may have been an excuse but he wouldn’t feel satisfied until he’d checked on her properly.  Her eyes were still closed.  He touched her arm again, shaking it a little this time.  There was nothing, not even a flicker.  He reached towards her neck.  No pulse either.  He smiled at the other woman as he passed, trying to disguise the fact that his hands had started to shake.  No need to panic anyone just yet.

“Charlie? Can you get on the radio? We need the police and an ambulance.  I think one of the passengers is dead.”

Three hours later he was back at home, nursing a large brandy.  He’d often wondered what it would be like to give a statement to the police.  In his case, fairly straightforward.  Of course, he’d left out the bit about recognising the woman.  Perhaps if they dug deeper they’d discover the lover they’d shared. He’d almost stopped thinking about Harry and the woman who’d stolen him away.  Then he saw his face staring at him from the front of the newspaper.  The funeral had skirted the issue but Harry’s mum had told him the truth when he went back to see her later.  What the newspapers had described as ‘taking a break-up badly’ was, in fact, ‘finding your fiancée in bed with another man’.  He hadn’t meant to do it, he’d just been sleeping badly and had taken a few too many pills.  Well, they were both sleeping now.  The irony had struck Craig as he’d leaned over her half full can of Coke.  As he tucked the empty packet of his Granny’s sleeping pills into the bin, he thought perhaps he would sleep better too.