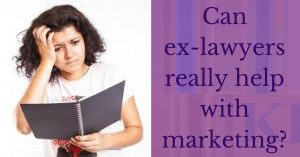 My decision to stop being a solicitor and become a writer was met with several different reactions.  To my great relief, my most closest friends cheered and confessed that they had always thought I was too nice to be a lawyer*.  Others responded in a more muted way, wishing me luck with a raised eyebrow.  One or two asked whether I had a back-up plan; I’ll get back to you on that.

By far the most common question from non-lawyers was what had prompted the move.  A lot of solicitors told me I was lucky to have something else I could do.  I won’t bore you with the ins and outs of the legal reforms over the last few years.  Let’s just say that things changed a lot and the parts of my job that I enjoyed largely fell away.  I also had a young family and those things combined to make me reassess my priorities.

Focussing on what I love

I love meeting clients.  This is partly because I’m very nosy and like asking questions about how things work.  A factory tour is my idea of heaven, partly because I used to visit my Dad in the textile factories where he worked when I was a kid.  I’ve always admired people who can make things.  I worked for defendants in personal injury claims. These were companies who were being sued either by their employees or customers. I used to spend time visiting them, speaking to the staff and looking around to find out how their business functioned and what they made.  Those factory tours were replaced by emails from people on site.

Business owners aren’t always writers.  Obviously there are exceptions, but when site visits gave way to emails I discovered that it was hard to get the detail I needed via someone else’s interpretation.  Phone calls were always useful but often difficult to schedule.  I realised that I like to find things out first hand then explain it in a way that the intended audience would understand.  A carefully worded question can go a long way, but I often found that seeing a business in action can reveal something important which hadn’t occurred to me before.

Planning to be an ex-lawyer

When I started making plans to embark on my new career, I realised that the ability to speak to people about their business then explain it in writing was a skill in itself.  I’m used to being an outsider looking in so can see things which could be important in a legal claim. I can also spot the things that could be a huge selling point to a potential customer.  I’m also not afraid to ask questions about how things work or what sets them apart from the competition.

I confess that I always think of marketing as putting forward a good argument.  Why should anyone buy one product as opposed to another?  How do you justify what you charge and what benefit is that going to bring to your customers?  I had those sorts of discussions with clients and insurers for years, usually when they didn’t want to pay out.  I’ve also lined the arguments up to present them to a judge.  Whilst there may be some discussion, it’s always the written work that forms the bedrock.

So here I am, having retired from one profession to embark on another, finding that a lot of the same skills apply.

If I can help you put forward a good argument or if you want to try a new approach to your content marketing, I’m for hire! Get in touch or register here to receive regular updates, special offers and a free copy of my guide, ‘Marketing magic: your indispensable guide to creating amazing headlines’.

*For the record, nice lawyers do exist, honest.

2 thoughts on “Can ex-lawyers really help with marketing?”